When you think about drones you probably think of all the cool things they can do. They can do many different tasks much more efficiently than the more traditional means of doing things. When you start to dig into it you see what drones are actually capable of and that their capability grows almost daily. Unfortunately that also means that drones have many uses adverse to business and operations. This is where our partnership with Dedrone comes in. Drone technology has advanced tremendously in the past few years, and today drones significantly aid in surveying, disaster relief, delivery, and many other business and consumer applications. In the wrong hands, however, a drone’s accessibility, capabilities, and ease of flying makes it especially suitable for hacking, surveillance, and terrorism.

AIRSPACE SECURITY WITH THE DRONETRACKER SOFTWARE

A short introduction to the Dedrone solution, including our DroneTracker software connected to multiple sensors for detection and classification of drone-based threats.

The Dedrone solution is 3 basic steps

Dedrone’s RF Sensors are purpose-built for airspace security and collect hard data on drone activity in the airspace. They detect all kinds of drones and have a coverage range over 1 mile in ideal conditions.

Almost all freely available drones use radio signals. On the one hand, they receive commands from the remote control, on the other hand they send data such as video images or telemetry, e.g. position or remaining battery power, to the remote control.

Dedrone's market-leading radio frequency (RF) sensors receive and analyze these signals and are able not only to reliably detect drones, but also to classify them - i.e. identify the manufacturer and/or model - and locate them. This applies to almost all commercial, hobby and home-made drones. 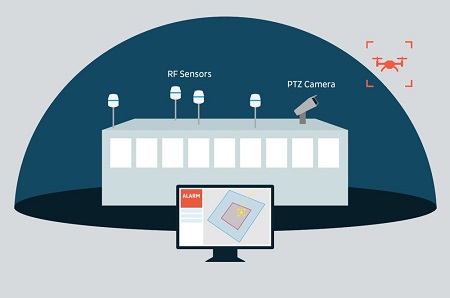 Multiple RF Sensors are used to pinpoint the location of the drone within the airspace. Other devices, like RADAR and image sensors, can be added to complement their use and create a more robust detection and tracking system.

Various manufacturers have developed RADAR systems specifically for the detection of drones. They are integrated into the Dedrone platform as needed to complement the RF sensors. Since radars detect objects, but only unreliably automatically classify them as drones, this assessment must be performed by an operator or automatically by PTZ cameras or RF sensors in conjunction with the DroneTracker Software. RADAR systems are used in particular by airports and military customers. Since they emit radiation, they are subject to approval and price-intensive to purchase compared to other sensors.

PTZ cameras have a Pan, Tilt, and Zoom function, which allows for the monitoring of a large area in the airspace with a single device. With these specific PTZ functions, small drones can be detected at a great distance. In many cases, a PTZ camera's high-resolution imaging enables security providers to capture visual evidence of a drone's payload, allowing them to prepare for any additional threats posed by the drone.

For more details and information on the solution please contact us or feel free to visit the dedrone website here https://www.dedrone.com/

Do you need help installing devices you already have?
Are you looking to discuss options?
Contact us now with any questions.